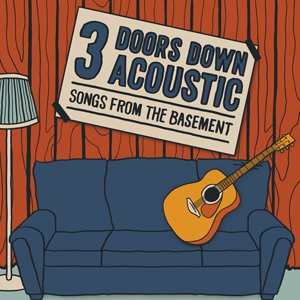 Following a successful coast-to-coast excursion across the US, the Multi-Platinum selling band, 3 Doors Down has announced a Canadian run of their “Acoustic – Songs From The Basement” Tour which will include a date at the Hard Rock Casino Vancouver on Tuesday, June 3, 2014.

Since forming in 1995, the Mississippi rock quintet has sold over 16 million albums worldwide. Their hits include “Kryptonite”, “Loser”, “Duck and Run”, “When I’m Gone”, “Here Without You” and “It’s Not My Time”. Their most recent album, The Greatest Hits was released in 2012 and features a collection of their nine #1 singles and three new songs including the Top 5 hit, “One Light”.

During their upcoming tour, they’ll be performing their classics along with fan favourites that have rarely been performed live. 3 Doors Down’s frontman Brad Arnold shares, “This acoustic tour has been such an amazing experience that we had to extend it into Canada. We cannot wait to see all of our Canadian fans!”