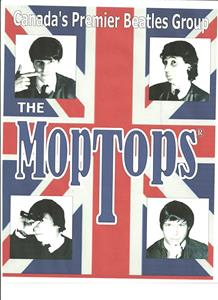 Bio: The MopTops, Sebastien DeCastell (John Lennon), Mark Olexson (Paul McCartney), Sean Dillon (George Harrison) and Christian Volkaert (Ringo Starr), have been performing together since 2003. The MopTops perform with two costume changes, which include the early Ed Sullivan, collarless grey suits, and the SGT Pepper uniforms, including wigs and Beatle boots, The MopTops also perform with authentic looking guitars, drums, and  the Shea Stadium Super Beatle, Vox amplifiers. With the right setting, The MopTops have available, on DVD projection, Ed Sullivan introducing The MopTops, for the Beatles early era, along with footage of “man landing on the moon” to introduce The MopTops for the SGT Pepper era, again, in the right setting, the band also has DVD footage of very silly 60’s TV ads, and Beatles cartoons to keep the audience entertained in between costume changes. Even though the authenticity “look”  is imperative to the Beatles live experience, The MopTops boast Family Friendliness, and sing-a-longs, along with what we like to call  “silly old Jack-assery”.

The MopTops have performed gigs such as 2, one month stints in Europe, June of 2010, being the most recent. Performed the Cloverdale Rodeo, the Penticton Peachfest, World Masters Sports at Edmonton Eskimo Stadium, etc… Corporate events, Car Shows etc…

Young or old, everyone loves the Beatles, and The MopTops  take the audience right back to  an era where everything seemed  fun and innocent.