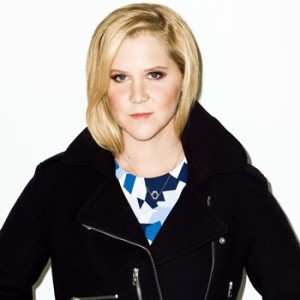 With her blend of wholesome, girl-next-door looks and edgy comedy, Schumer has become one of the hottest names today. She made her television debut in 2007 when she was a contestant on NBC’s hit competition series, Last Comic Standing. After guest appearances on such sitcoms as ABC’s Cupid and NBC’s 30 Rock, she was invited in 2011 to skewer Charlie Sheen on The Comedy Central Roast of Charlie Sheen. That same year, she released her stand-up album, Cutting which reached the Top 5 on the Billboard Charts.

In 2012, she appeared on The Comedy Central Roast of Roseanne and her own one-hour television special, Mostly Sex Stuff which ended up becoming Comedy Central’s second-highest rated special of the season. Last year, her sketch comedy series, Inside Amy Schumer premiered on Comedy Central to the network’s highest ratings for 2013. Just last summer, she was busy shooting the script she wrote for her first feature film, Trainwreck in which she stars alongside Bill Hader, Tilda Swinton and Brie Larson. The film – which was produced and directed by Judd Apatow – is scheduled to be released next summer. Earlier this year, Schumer was presented with Variety’s Breakthrough in Comedy Award.