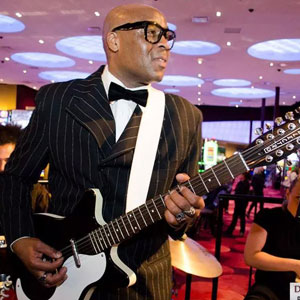 Iowa-raised, Abbotsford-based singer-guitarist Antoine “Baby Harry” Calaway, is loaded with ideas, as seen on the 73-minuteSave Your Self, one of four CDs he’s home-recorded over the last couple of years. His obvious influences include Lenny Kravitz, Prince, and various forms of funkadelica, and he fashions a good approximation of those sounds by playing all the instruments, although some sessions are let down by the thinness of electronic drums.

Over the course of one album, let alone all of them, the material gets a bit thin. Antoine has a serviceable tenor voice, and although almost every track hits an attractive groove early on, his tunes rarely rise above the two-chord-vamp level. Even the catchy “Soulmate” bogs down in repetition. “Soul Psychedelic” offers some nifty, ’60s guitar, but it lopes when it should start soaring. The slinky, Curtis Mayfieldí‚ ¬tinged “Dazed”, about being beaten down by parents and so-called loved ones, is one of the few numbers to sustain interest.

Although the sprawl of Save Your Self and its siblings make them pleasant to have around, Antoine might do well to hire a drummer, bring the guitar forward, and boil all his overlapping concepts into fewer, more concentrated tracks that possess more contrast and colour. That kind of soul would be psychedelic indeed.