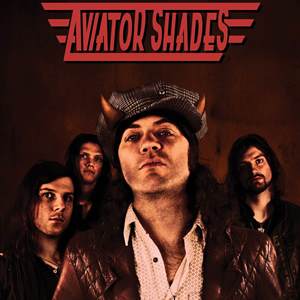 One thing can be said about Aviator Shades: they understand Rock and Roll.

Big choruses that stick in your head for days. Massive guitar riffs intertwined with fiery, melodic leads. A rock solid rhythm section that commands it’s audience to shake their hips (and bang their heads).

Aviator Shades is the brainchild of singer / bassist Dave Gorman, whose calling to live, eat and breathe Rock n’ Roll saw him leave his native Ireland for the shores of Western Canada. Performing regularly throughout Vancouver’s rock scene with a revolving cast of talented (albeit temporary) musicians, Dave became hellbent on assembling the ultimate army of rock soldiers.

Enter guitarists George Baker and Shaun Michael Thackeray. Having only met when Gorman brought them together, they became instant friends found an undeniable (perhaps eerie) chemistry together; swapping leads and harmonizing in the spirit of their rock guitar heroes. The addition of Kamloops based rocker Spencer Tomlinson, whose hard hitting drumming melded beautifully with Gorman’s thundering bass lines, completed the essential Aviator Shades line up.

Aviator Shades spent much of 2013 crafting new material with Default drummer-turned-producer Danny Craig (One Bad Son, Fighting For Ithica). With their songwriting and performance skills pushed to new heights, the band crafted a six song EP which greatly surpassed their own heightened expectations.

Continuous gigging and a dedicated rehearsal regiment have moulded Aviator Shades into a powerhouse of pure rock energy. Their timeless, empowering sound and uplifting performances signal that 2014 is just the start of something big… This band truly is Ready To Blow.