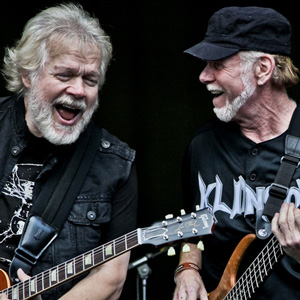 Canadian rock legends Randy Bachman and Fred Turner will be bringing their classic hits to the Hard Rock Casino Vancouver on Friday, May 30, 2014.

Bachman earned his first colossal success with The Guess Who when their 1970 hit, “American Woman” scored the #1 spot on Billboard’s Hot 100 singles chart … a first for any Canadian band. He soared even further with Turner in Bachman-Turner Overdrive which became a music phenomenon with extraordinary global success.

Over its four-year run, the band sold more than 30 million records accumulating hits in more than twenty countries. The band reached #1 on Billboard’s Hot 100 singles chart with “You Ain’t Seen Nothing Yet” in 1974. Additional hits include “Let It Ride”, “Takin’ Care of Business”, “Roll On Down the Highway”, “Hey You”, “Lookin’ Out For #1”, “Quick Change Artist” and “My Wheels Won’t Turn”. Next month, Bachman and Turner – along with their BTO bandmates – will be honoured at the 43rd Annual Juno Awards when they’re inducted into the Canadian Music Hall of Fame.