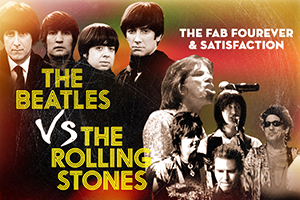 The Fab Fourever and Satisfaction

The two greatest rock ‘n’ roll bands of all time face off as the original Legends of Rock’n’Roll presents tributes to the Beatles and the Rolling Stones. Taking the side of the Beatles is Fab Fourever, Canada’s top Beatles tribute band. With brilliant musicianship and authentic costumes and gear, the Fab Fourever plays all the hits of the 1960’s. They face off against America’s #1 Stones tribute band Satisfaction, who offer faithful renditions of the music and style of Mick Jagger, and the Rolling Stones… the bad boys of the British Invasion.

For decades, the battle has raged: Beatles or Stones? Which is the better band? In their heyday, fans accused London’s Rolling Stones of stealing ideas—even entire albums—from their Liverpool counterparts. At the same time, The Beatles often copied the Stones’ “bad boy” style and attitude.
Both groups produced an array of hits that changed musical history and inspired a debate that has never been settled: Which is the greater band? Now a couple of “world-class” tribute bands will try to settle the score… Fab Fourever and Satisfaction will present “The Beatles vs The Stones: A Musical Shoot Out” on Tuesday, November 14 at the Port Theatre in Nanaimo.
Two of the greatest bands in history will be portrayed in an onstage duel that their 1960’s fans could only dream about. Don’t miss it!