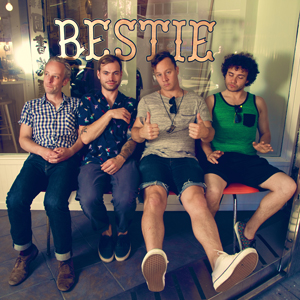 On January 16, 2013, BESTiE released their debut single, “Pineapple” shot and directed by lead singer Orchard, a Gemini-nominated filmmaker whose documentaries have aired on Bravo! Television, and various short films played in festivals around the world. The tropical-themed video, with now over 15k views, was very well received, and has been featured in over 30 music blogs and media outlets in Canada, the US and abroad. The single managed to reach the #25 spot on Hype Machine and earned the group Vancouver-based radio airplay. They followed the success of Pineapple with an equally successful “Asleep on the Bus” in March 2013. Both tracks were produced by Digory Smallz, known for his work with Young Liars,
Oh No! Yoko, Jasper Sloan Yip and Joshua Hyslop.

The group’s new video for “Asleep On The Bus” also directed by Orchard, was selected as Shore FM ‘Best of B.C’ for October 2013, winning the band $10,000. The group wrapped up a successful summer tour, hitting festivals such as Sled Island, Music Waste, Khatsalano, Rifflandia and Vancouver Fringe, by being announced as 3rd place winners of the 2013 Peak Performance Project, taking home $50,000 to be used towards furthering their careers. Challenges for this prize money included a collaboration track, ‘Together’, written and performed with 2013 Peak winner, Rykka, which was chosen by the Peak judges for ‘Best Collaborative Song’, as well as a weeklong industry lead boot camp, and a live showcase featuring the Top 20 artists.

They are currently in the studio recording their debut album Juno award-winning producer, Howard Redekopp, best known for his work with Tegan and Sara, Said The Whale, The New Pornographers, Mother Mother, and the Zolas. Album to be released early 2014, with a national tour scheduled for spring 2014.