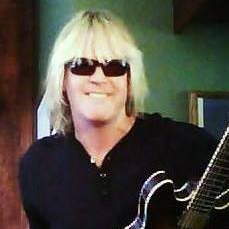 Vancouverite, Bobby Dickson delved into playing guitar at age seven. Rooted in classical form and mentored by an English Beatle’s disciple who hand wrote “Eight Days a Week” for him to play. Receiving his first electric
guitar and amp at age nine, his self discipline led him to play during lunch hours at his school. At age 10 he composed “Wine and Roses” and still plays this today. At age 11, he played Glen Campbell’s “Classical Gas.” In 2010 Bobby started performing lounge acts with his acoustic guitar and played regularly at West Beach. He played classic/pop rock in several lounge/pub venues for the past three years. In 2011, Bobby played “Summertime” live with Lee Aaron and Jerry Doucette on the Electric Lunch with Robin LaRose. Bobby’s influence in his music is derived from Jimmy Page and Eddie Van Halen. Robert Plant influences his vocal style. He plays approximately 30 – 40 artist’s covers at any gig.