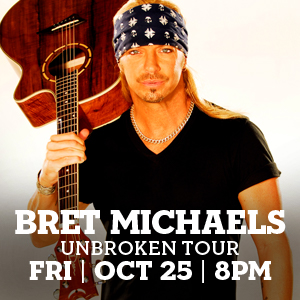 Bret first rose to fame as the front man of Poison, helping to define the rock-n-roll scene on the Sunset Strip. One of rock’s most iconic and enduring bands, Poison’s massive success includes selling over 50 million records worldwide and numerous hit singles.

Equally as successful as a solo artist, Bret’s career has charted its own course with multiple albums. His album Custom Built topped the charts, reaching number one on Billboard’s Hard Rock list. His record Jammin’ With Friends featured a myriad of legendary artists including Joe Perry, Loretta Lynn, Jimmy Buffet, Ace Frehley, Michael Anthony and more.

When Bret is not touring, he can be found both in front of and behind the camera as a director, producer and reality TV superstar. His first foray into reality TV brought the record-breaking Rock of Love with Bret Michaels franchise to VH1, one of the most successful show’s in the network’s history. Following three successful seasons of the show, he teamed up with VH1 for the docu-series Life As I Know It, setting even more records. Bret’s most recent television endeavour, Rock My RV with Bret Michaels on the Travel Channel, saw Bret and his team revamping and redesigning dilapidated RV’s in true rock style.

Tickets for Bret Michaels go on sale Friday, September 6, 2019, with prices starting at $69.50 (plus service charges).