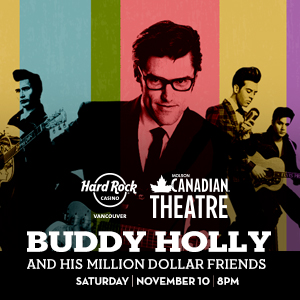 Presented by the Legends of Rock n’ Roll, “Buddy Holly and his Million Dollar Friends” is a fun-filled, toe-tapping evening of rock & roll music. This tribute show features headline performers from two award-winning musical productions on one stage.

Zachary Stevenson from “The Buddy Holly Story” leads the show as Buddy Holly, and he is joined by the headline performers from the hit production, “Million Dollar Quartet”. Not only does Stevenson duplicate Holly’s sound, gestures and mannerisms, but he closely resembles Holly in appearance as well, bringing Buddy Holly to life like no other.

The Buddy Holly Story hits the stage at exclusively at Hard Rock Casino Vancouver for one night only, Saturday, November 10, 2018.