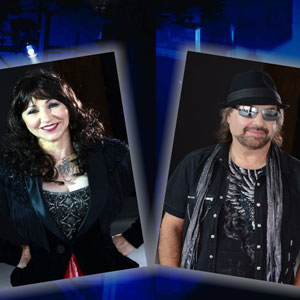 Catch 22 is the union of two veteran entertainer/singers from Vancouver who, upon working together in “BARRACUDA” the essential Heart tribute, decided to extend their horizons and for a killer Current Rock/Top 40 band. Donna Caruk, cut her teeth with many club bands around Vancouver namely Army and Profit, but had always wanted to sing Heart material. After meeting Roger Fisher of Heart and gaining his endorsement she went on to hone her voice skills and the work shows. Ray Roper, formerly of “STONEBOLT” had some major hits in the 80’s, singing “I WILL STILL LOVE YOU” and “QUEEN OF THE NIGHT” and co-producing five of the STONEBOLT albums. He has been writing, recording and performing for years in bands such as TRAMA, THE RAY ROPER PROJECT, and THE EDGE. These two powerhouse singers really compliment each others styles and bring some polish to their classic repertoire.