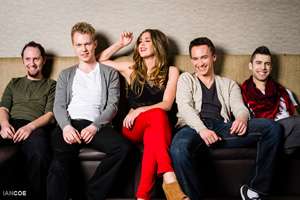 Since their official formation in the spring of 2012, Vancouver’s Champagne Republic has been hard at work writing new material as well as refining their live sound. The group- consisting of lead singer Emily Chambers, guitarist Marty Majerski, keyboardist Philip Laessoe, bassist Eric Lipshultz and drummer Kevin Madden- came together over a mutual love of classic and contemporary soul, funk, and
R & B artists.

Champagne Republic has quickly developed a reputation for their high energy shows, being featured at such events as The Vancouver Fashion Week Opening Gala, The Langley Canada Day Celebration, The Spirit of the Sea Festival, and The Harmony Arts Festival. They are rapidly growing an enthusiastic local fan base while aiming at establishing a cross Canada presence by next year.

The group is currently working on a debut EP of original material aiming for a Spring 2013 release. Let’s Get It On is the first track off that project.

The full story behind the band has taken some interesting turns; after attending Berklee College of Music on a vocal scholarship, Vancouver’s Emily Chambers brought her talent to the streets of Europe, busking her way through the South of France and Italy for over 4 months. After returning home with new ideas and inspiration, Emily wrote and released her first solo album, Feet On The Ground.

Upon the album’s release, Emily was in search of musicians who shared a similar musical vision. In the spring of 2011, Marty Majerski responded to an ad she had placed on the internet in search of a guitarist. The two performed their first gig together just three days after initially speaking, quickly developing a strong working friendship based around their mutual love of artists like Joss Stone, Adele, Aretha Franklin, Lauryn Hill, Stevie Wonder and John Legend.

Following that first gig with Emily, Marty contacted long time friend and Capilano University Jazz Studies classmate Eric Lipshultz (bass) to join the project. Having already played in several bands with Marty, Eric was a natural fit. Months later, Phillip Laessoe (keyboards) joined the trio, adding a vast spectrum of ideas to the group from his years of touring experience across Europe.

The last missing piece to the puzzle was solved in early 2012 with the addition of drummer Kevin Madden, who adds an exciting energy with the heavy drum sound they were looking for. The Champagne Republic state of mind is growing as fans discover the energy their sound delivers- and there’s plenty more coming down the pike!