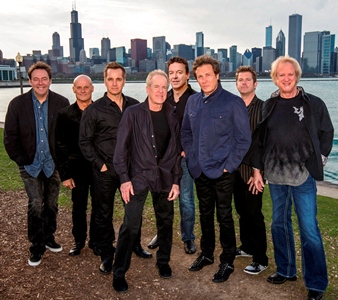 Grammy Award-winning, Multi-Platinum band Chicago will be bringing back their long string of hits to the Hard Rock Casino Vancouver on Friday, June 19, 2015.

Known for their unique mix of rock, pop and jazz, Chicago has released over 30 albums with sales well beyond the 40 million mark. Their chart-topping singles include “Make Me Smile”, “If You Leave Me Now”, “Does Anybody Really Know What Time It Is?”, “Beginnings”, “Color My World”, “Saturday in the Park”, “Just You ‘N’ Me”, “Old Days”, “Baby, What A Big Surprise” and “25 or 6 to 4”.

With founding members Robert Lamm, Lee Loughnane, James Pankow and Walt Parazaider, Chicago is one of the few major bands that have never disbanded or even taken a hiatus. Last year, their debut album, Chicago Transit Authority was inducted into the Grammy Hall of Fame and as well, the group released their most recent album, Chicago XXXVI: Now.