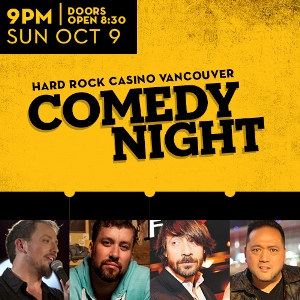 Brett Martin
Brett Martin is one-of-a-kind. From deadpan to emphatic, stupid to insightful; you never know what’s coming next – except that it’ll surely be worthwhile. He’s been featured on CTV, The Comedy Network, SiriusXM Satellite Radio, and works across Canada and the United States. Come see why and how he’s made a name for himself.

Chris Griffin
Chris Griffin, having endured over a decade of Family Guy jokes, entered the world of standup comedy to reclaim his name. He won his hometown’s Great Canadian Laugh Off competition in his first year, earning him a trip to Toronto to compete in the finals. The early success inspired him to quit his stable job and put his two degrees towards doing what he knows best – drinking and telling jokes. His unique humour merges intelligence with a blue collar upbringing to create a perspective that is equal parts biting and empathetic to the human condition. Griffin recorded his first full length comedy special at the EPCOR Centre’s Engineered Air Theater. The Mixtape was released at the end of 2013 coinciding with his move to Vancouver, where he now resides. He was featured on iChannel’s No Kidding, and as part of the Sled Island Music and Arts Festival, Funnyfest and the YYComedy Festival. Earlier this year he performed in the 2016 JFL Northwest Comedy Festival, and he has just been selected as the only Canadian to compete in this year’s San Francisco International Comedy Competition in September.

Patrick Maliha
Patrick Maliha’s act has been described as Ray Romano meets a 21st Century Don Rickles. Originally from Thunder Bay, Patrick now makes his home in Vancouver, B.C., Canada. A professional Stand-up comedian & talented impressionist, Patrick has Headlined and MC’ed various shows at a multitude of comedy clubs, festivals and corporate events through out Canada and the U.S. Currently, Patrick is the creator and producer of one of Canada’s largest comedy competitions, The People’s Champ of Comedy and the world record holder for most impressions in one minute beating out the previous record holder, former SNL’er Dana Carvey.

Ron Josol
Ron Josol, is a Canadian-Filipino comedian who is well received from every corner of the world. Ron stirs up and samples the multi-cultural melting pot that mirrors life in most urban centers today. He presents hilarious scenarios and comments on our global society inherent contradictions by combining a one-liner and a story telling style. He regularly performs in Canada, UK, Scandinavia, Caribbean, Asia, Middle east, Australia and USA. He has performed around the world for almost 20 years which makes him one of the most sought after n vibrant comics toady.
In 1998 he was the winner of the “Just for Laughs” home grown comedy competition in Burlington, Ontario, Canada which brought him to Just For Laugh festival that year. Since then he has performed at the Just for Laugh festival 5 times. He has been part of the Kings n Queens festival in Malaysia and Singapore, the Magners comedy festival in Asia, the LOL comedy festival in the Caribbean, Winnipeg Comedy Festival, and the Maui ALT Comedy Festival.