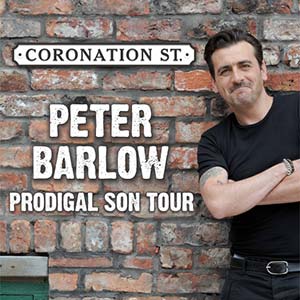 The just announced Coronation Street: Peter Barlow – Prodigal Son Tour will be coming to the Molson Canadian Theatre at Hard Rock Casino Vancouver on Friday, May 5, 2017.

Actor Chris Gascoyne – who plays the role of lovable bad boy “Peter Barlow” on the long-running British soap opera, Coronation Street – began his acting career in 1985 portraying school bully “Barry Kent” on ITV’s The Secret Diary of Adrian Mole, Aged 13¾. Television credits during the 90’s include ITV’s Hard Cases, BBC’s The Locksmith and ITV’s Soldier, Soldier. In 2000, Chris joined the cast of ITV’s Coronation Street making his first appearance on its live 40th anniversary episode where he quickly became a fan favourite. He went on to have such an impact with viewers that today “Peter Barlow” remains one of the show’s most popular characters.
Coronation Street – which centers on the domestic lives of the working class who reside in the fictional town of Weatherfield – premiered in the UK on ITV Granada Television in 1960 and was soon syndicated on other ITV franchises. By the late 60’s, the series began airing internationally in Australia and New Zealand as well as in Canada on CBC Television. In 2010, Coronation Street became the world’s longest-running television series in production after CBS’s As the World Turns was cancelled in the United States.
In a lively and interactive format, audience members will be treated to behind-the-scenes stories on Corrie’s cobbles followed by a Q&A session with Chris.