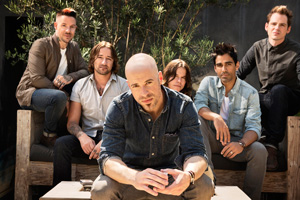 Multi-Platinum selling band Daughtry, who are currently touring across Europe, will be bringing their hits to the Hard Rock Casino Vancouver on Friday, May 23, 2014.

Formed and fronted by American Idol alum, Chris Daughtry, the band has sold over 7.5 million albums worldwide since releasing their self-titled debut in 2006. Their hits include “It’s Not Over”, “Home”, “What I Want”, “Over You”, “Feels Like Tonight”, “What About Now”, “No Surprise”, “Life After You”, “Crawling Back to You”, “Outta My Head” and “Start of Something Good”.

The group’s most recent album, Baptized was released this past November and features the single, “Waiting for Superman” … the album reached #6 on the Billboard 200 albums chart. To date, Daughtry has garnered four Grammy nominations and has won four American Music Awards.