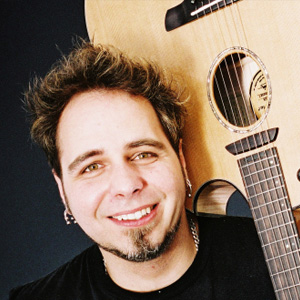 To listen to the music of David Martone is like experiencing an explosion of sound, color and flavor simultaneously! Sometimes over the top, sometimes minimalistic, often a mixture of the both, Martone never ceases to amaze with his incredible guitar talents.

Dave’s discography is extensive, with 6 studio album releases, and 2 live concert DVD’s, as well as countless compilation albums, to his credit. Dave has been on the cover of Muzik ETC and GONZO magazines in Canada, as well as having major features in Guitar Player, Guitar World, and Guitar One Magazine, where he was voted one of the top 4 underground shredders in North America!

In addition to owning his own production facility (“Brainworks”) in Vancouver, Dave has numerous credits as a session guitarist for major record companies in Canada and the US. He is also an educator and clinician for such companies as the prestigious Berklee College of Music, The National Guitar Workshop, Workshop Live, Parker Guitars, Digitech Processing, Vox Amplification, Radial Engineering, and Cakewalk Recording Software.

Dave has worked with the top guitarists in his field, including the likes of Joe Satriani, Steve Vai, Yangwie Malmsteen, Greg Howe, Paul Gilbert, Marty Friedman, Jennifer Batten, Chad Kroeger, and on and on.