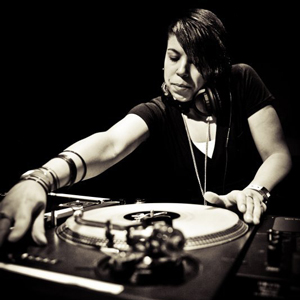 Originally from the East Coast of Canada, now based out of Vancouver BC, SHE is one of the top female DJ’s on the Vancouver circuit. Growing up in a house-hold filled with funk and soul, She quickly acquired a love for music. From funk and soul, a love for hip hop developed and her journey into music began.

As a DJ, her style ranges from the roots of today’s music; classic funk, disco and soul, but SHE also crosses genres of West Coast and Chicago House, funky mid-tempo Breaks and of course Hip Hop and R&B.

Through her persistence and passion, SHE has been able to rock the decks along side some of the West Coast’s finest DJ’s including Vinyl Ritchie, Mat The Alien, U-Tern, Bettie Forde, Luke McKeehan, Neighbour, Flip-Out, and on an international tip, SHE has opened for the likes of Cut Chemist, formerly of Jurassic 5, DJ Ayers & DJ Eleven of The Rub (NYC), DJ Red Alert (NYC), Queen Latifah, Lauryn Hill, Jean Grae, Nina Sky, Chuck Love (Om Records), Montell Jordan, Sharon Jones & The Dap Kings, Black Milk & MURS & Stretch Armstrong (NYC). SHE takes the title of first female DJ in Canada to compete in the worldwide Red Bull 3 Style competition in 2010 and is a 2012 Pioneer DJ Stylus Award Nominee for Female DJ Of The Year.

Former manager of Canada’s #1 record store; Beatstreet Records, SHE is currently the host and creative director of GROUNDED TV & promoter and founder of JANE BLAZE PRODUCTIONS.

SHE has held residencies at major clubs in Vancouver and her corporate clients have included H&M, Aritizia, Nike & Red Bull Canada to name a few. As well, SHE is a resident DJ with Canadian House label Nordic Trax.

Staying true to delivering thought provoking music and memorable events to the Vancouver music scene, SHE has proven to be to be a confident business woman in many respects.

Grounded TV
The primary purpose of Grounded TV is to write, film and edit cultural and socially relevant content for the purpose of distributing it via a web‐based television network.

This web‐based television network sheds light on people and events that bring a positive change to our world through their music, art and social activism.

The network also acts as an online community where artists and fans can connect, network and promote their projects to further the growth of this amazing social movement. Our mantra is simple: to create a positive change and support those doing the same.