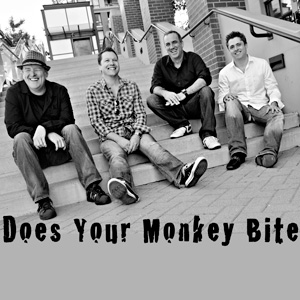 Does Your Monkey Bite? (Country Nights)

Since the spring of 1992, the boys of DOES YOUR MONKEY BITE? have performed well over 2500 shows in Pubs, Clubs and Theatres across Canada.

One of the most admirable and unique qualities of the group is that since its inception, there has not been a line up change. The same group of buddies that began playing right after high school are the same best friends that take the stage today providing a high octane, fun fueled party for your establishment or corporate event. Sometimes we wear pants.

We have been referred to as a band of “brothers” and we simply love getting together and playing fun music and entertaining no matter what the venue. From disco to rock, 80’s to new country, current chart toppers and everything in between, DOES YOUR MONKEY BITE? engages the crowd and delivers the goods. Drawing on their years of experience they can tailor the set list to ensure any crowd has a great time.

In 2000, DOES YOUR MONKEY BITE began a relationship with the Vancouver Molson Indy and the Greg Moore Foundation, performing for thousands during the racing weekend. This put the band on an international stage and thus began a strong corporate following. At this time DOES YOUR MONKEY BITE? got the attention of the famed ROXY NITECLUB in Vancouver, where the band became the Saturday house band.

In their time at the Roxy, the band was fortunate to share the stage with a veritable who’s who of the music and entertainment industry. That list includes members of: The BareNaked Ladies, OurLady Peace, The Tea Party, Nickelback, Hinder, Keith Urban’s band, Thornley, Todd Kerns, Loverboy, Hedley, The Trews, Bryan Adams and the Trailer Park Boys.