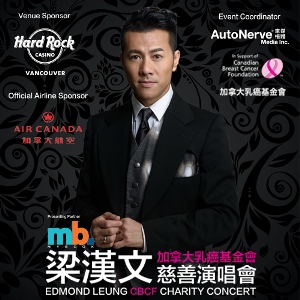 Edmond Leung finished his forth solo concert “EDMOND LEUNG HALF TIME SHOW” in the Hong Kong Coliseum in August 2015, which earned overall raving reviews. He had proven his talent as a singer-songwriter by overwhelming the audience with his hits from the beginning of his singing career to his latest releases, which focus on the next chapter of his life.

Later in the year in November, he performed in the Hong Kong Coliseum again, this time as part of “Man Band” (Nan Ren Bang), along with Richie Jen, William So and Steve Wong. The concert was preceded by an album where they had united to share their passion for life, music and family.

Edmond Leung was not a stranger to group performance, as he had also joined force in 2009 with three of his best friends, Dicky Cheung, Andy Hui and William So, and formed “The Big Four”. The group hosted a talk-show series and held concerts worldwide, including a stop in Vancouver in 2010.

In addition in being a singer, Edmond Leung was also the co-host of the popular variety show, Beautiful Cooking and he also showed off his acting talent in various drama series and movies, including portraying as Tang Sanzang (the Buddhist Monk) in The Monkey King, a TV series based on the novel Journey to the West.

Edmond Leung is an active member in charitable works, in particular helping families who struggle with breast cancer. On April 30, 2016, he is expanding his charity territory to Hard Rock Casino Vancouver for his CBCF charity concert benefiting the Canadian Breast Cancer Foundation. He promises to bring the Vancouver audience a night to remember, including the most anticipating component of all his concerts, where he will perform on the piano.