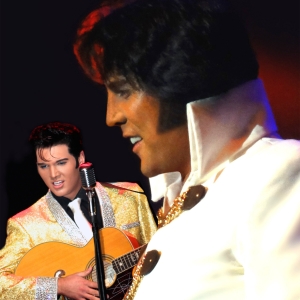 Elvis: The Ultimate Tribute To The King

Graceland’s most popular impersonators, Shawn Klush and Cody Ray Slaughter will be performing in the critically acclaimed Elvis – The Ultimate Tribute to the King at Hard Rock Casino Vancouver on Saturday, January 23.

Klush has won multiple competitions for his talents including the Ultimate Elvis Tribute Contest in Memphis while BBC1 has dubbed him “The World’s Greatest Elvis”. Slaughter began entertaining since the age of thirteen and just last year, he toured North America portraying Presley in his younger years as part of the Tony Award-winning cast of The Million Dollar Quartet.

Slaughter opens the show as the hip-swiveling superstar of the early years complete with blue suede shoes, twitching lip and slicked back pompadour hair. By the time Klush walks out in his jumpsuit, a throng of women are usually crowded in front of the stage. He often carries the illusion to the point where the girls literally smother him with hugs and kisses when he leaves the stage to sing to individual audience members.

The production has been hailed by critics and fans alike as “the most authentic and endearing tribute to the King in concert that you’ll ever see”.

Tickets are on sale now and are $34.50 (plus service charges) – Cabaret Seating.