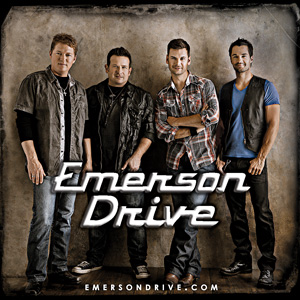 Multiple Award-winning country music band, Emerson Drive will be cranking out hit after hit during their one-night performance at the Hard Rock Casino Vancouver on August 7, 2014.

Founded in 1995, Emerson Drive grew out of a dream that began in frontman Brad Mates’ hometown of Grande Prairie, Alberta. During their evolving career, they have scored numerous hits including “I Should Be Sleeping”, “Fall Into Me”, “Last One Standing”, “A Good Man”, “You Still Own Me”, “She’s My Kind of Crazy”, “Let It Roll”, “With You”, “She Always Gets What She Wants” and their Grammy-nominated chart-topping ballad, “Moments” from their 2006 album, Countrified.

The group has garnered numerous industry awards and nominations both in Canada and the US including the Canadian Country Music Association’s “Group of the Year”, the Academy of Country Music’s “Top New Vocal Group” and Billboard’s “#1 Top Country Artist of the Year”.