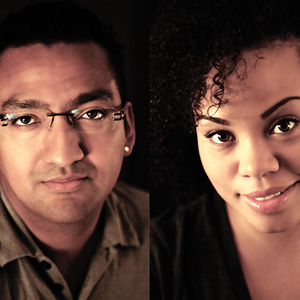 Carlos Arias has been musically inclined since he was a wee toddler. Using (and ruining) mom’s pots and pans as drums was his favourite pastime. Many years later, after studying jazz at Cap U (Vancouver, BC) and audio engineering at Vancouver film School, Carlos is a sought after producer/arranger in the Vancouver area with specialty in vocal and Latin production. He has worked with many well-respected musicians and singers in both Gospel and non-Gospel genres and has been involved in many bands and ensembles, from A Cappella jazz to Latin Orchestras. His Gospel group Koinonia Worship has had mass distribution in Latin America and has received accolades. He has recently toured as bass player with Proyecto A, ex-members of the Venezuelan salsa group Los Adolecentes. He is actively involved working as a singer, songwriter, and producer, working with various artists and churches while slowly developing his own material.
​
Born and raised in Vancouver BC, Jena Fair has been singing ever since she could talk. Following in the footsteps of her father Jena developed a passion for music, singing, drama, theatre and “all things entertainment” at a young age and has never let go since. At the age of 17 she was honoured by the Black Cultural Society of B.C. and received the top Jr. Black Achievement Award for her contribution to the arts, one of various awards Jena has received honouring her for her work.
Upon graduating high school, Jena received a full scholarship to attend the prestigious Berklee College of Music’s Performance Program in Boston Massachusetts. During her studies there Jena furthered her musical capabilities focusing less on theatre and developing more of a taste for music production and song writing
Upon her return home she met and found her niche at the time in Omar Khan and David Morin, when they formed an R&B trio called Shades of Soul. They released their 1st single to radio early in 2003. The single “Get with you” quickly fell into heavy rotation on the urban station in Vancouver (The Beat 94.5) even claiming the No. 2 spot on the “Blazin Seven @ 7” show for the most requested songs of the day.
More recently Jena just returned from several overseas stints in Asia HB Wild. Currently Jena is writing, collaborating, performing & auditioning every chance she gets while focusing her talents on a solo record, and writing for film & TV.