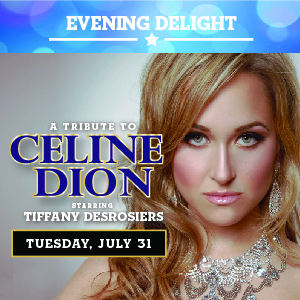 Enjoy the hits of Celine Dion? If so, be sure to join us for the ultimate tribute show on Tuesday, July 31. Featuring Tiffany Desrosiers, call (604)-516-7121 to reserve your table today. Doors open at 6:30PM.

‘Celebrate Celine’ is Produced by Moon Coin Productions and stars powerhouse vocalist Tiffany Desrosiers. Tiffany is a versatile pop vocalist and songwriter who has shared the stage with David Foster, Ben Harper, Jackson Browne, Colin James, the Canadian Tenors, Mark Masri, Jully Black and Loverboy. Tiffany has sang on recordings for Rita MacNeil, Mýa and Melanie B (Spice Girls). Tiffany made her presence known to thousands when she was hand-picked to record and perform the 2010 BC Summer Games Ceremonies theme song.

A Vocal Performance graduate from the University of British Columbia Bachelor of Music program, Tiffany’s unique ability to sing both pop and classical styles led to a performance of the role ‘Köningin der Nacht’ in Mozart’s Die Zauberflöte. On three separate occasions, Tiffany won the BC Provincials, and later went on to represent British Columbia at the Nationals in New Brunswick.