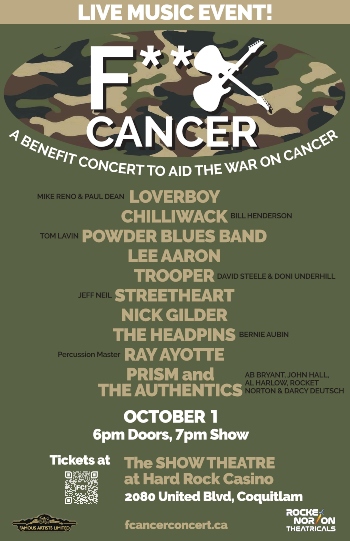 A who’s who of Vancouver’s historic music scene will come together October 1st to support renowned drummer Rocket Norton with a benefit concert to raise funds for cancer research.

Two in five Canadians will get cancer in their lifetime, and in 2021 it came a knockin’ on the door of Rocket Norton, formerly of the band PRiSM. During his treatments, he received a T-shirt from his friend Bruce Allen, that had bold block letters on it F**K CANCER.  Rocket read it as a battle cry. His fellow musicians heard the call and that’s how it all began.

“This is a difficult time for me and my family, just like it is for any family that is touched by cancer,” said Norton. “I can’t thank my friends in the music industry enough for helping provide a platform where we and music fans can come together, raise money for cancer research, and collectively say F**k You to Cancer.”

Participating bands read like a history of the Canadian music scene and include:

The benefit concert will take place October 1st at the Hard Rock Casino in Coquitlam, with all proceeds going directly to the BC Cancer Foundation.

Rocket was not only the drummer for Juno-award winning PRiSM, but he also spearheaded the Rocket Norton Band, The Seeds of Time, The Experimental Warrior, Revolver: The World’s Best Beatles Band, The Rhythm & Blues Explosion and Tangerine.  He also led the house band, Rocky & The Jets, on CKVU-TV’s Vancouver show for several years.

For details and ticket information about the benefit concert, please visit: F**KCancerConcert.ca