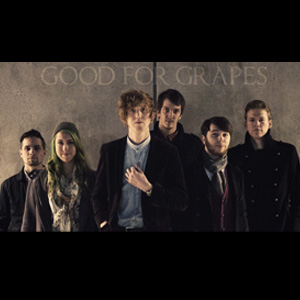 Good For Grapes formed in September of 2010, after a group of friends took a trip to Victoria, BC for some modest busking. Drawing unexpected crowds, this young and aspiring band took form; an original and talented six-piece group, with an array of harmonizing voices and instruments. Hailing from Vancouver, British Columbia, this folk / alternative act has been gaining momentum ever since they stepped into the music scene. Their live stage performance has evolved into an incredibly active, folk stomping, and inviting energy; always resulting in an extremely enthusiastic and involved audience. Beginning by supporting charities and foundations, their unique folk sound has been accepted into a large variety of venues. Through this, they have gained a loyal fan base, which grows at every turn.

Entering their first Battle of the Bands (Rogers urMusic), they surprised the community by winning the Vancouver vote. As if this wasn’t enough, venturing further into the competition found them winning the National vote by a landslide, making them the unmistaken National winners. Soon after, they entered Supernova’s “Band on the Run to the UK” competition. After drawing huge and unexpected crowds to the multiple shows, they quickly won the qualifying round and advanced on to winning the National Vote AGAIN.

Since then, in just over a year, the band has had the chance to perform at many festivals around the country, including sought after spots to open for Mother Mother and Spirit of the West at their sold out Commodore Ballroom performances. Currently the band is recording their debut full length album at the Hive Studios, produced by Colin Stewart (Oh Fortune, Tiger Talk) and with another cross-country festival tour coming summer 2013, the band is sure to attract more sold out crowds to their lively and energetic performances.