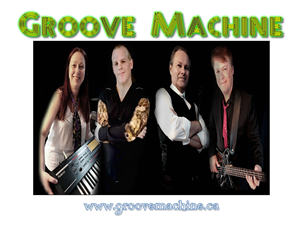 Groove Machine is a 4 piece band from the lower mainland and greater Vancouver area. Formed in 2015, they have already made waves in the local music scene. Featuring 4 lead and harmony vocalists, a high-energy live show, great crowd interaction, and VAST song list, spanning from the 60’s to current, this band is literally a party waiting to happen. Groove machine also cover MANY styles of music, including classic rock, pop, top 40, funk, disco, dance, and anything that would make you want to get up and dance. If you want a fun and unforgettable night out, spend it with the Groove Machine band, they will NOT disappoint.