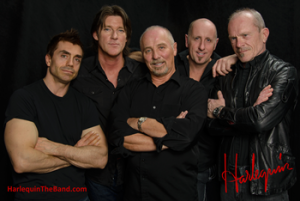 Harlequin will rock in the New Year at Hard Rock Casino Vancouver on December 31, 2014 with special guests The Fever.

Canadian rockers Harlequin have been performing since the mid-70’s and began their recording careers in New York at The Record Plant with Jack Douglas, legendary producer of John Lennon, Aerosmith and Patti Smith to name a few. Their hits include “Survive”, “Sweet Things in Life”, “Innocence”, “Thinking of You”, “Superstitious Feeling”, “I Did It for Love” and “Take This Heart”.

In 2006, they were inducted into the Western Canadian Music Hall of Fame. Today they still enjoy major airplay on the radio and are feature prominently in many a classic rocker’s music collection. If you’ve never seen Harlequin perform live, you owe it to yourself to see why they are still around after more than three decades.