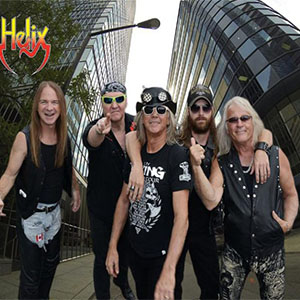 Exciting things like that have been happening throughout Helix’s thirty-five year career. And what a career it’s been! The band, formed in 1974 in Kitchener, Ontario, has sold over 2,000,000 albums, had four gold and 2 platinum albums, has had a Number One record in the country of Sweden, has toured 19 countries, 3 continents, and played with over 150 of the greatest rock and roll recording acts in the world.

A list of acts the band has played with over the years sounds like a who’s-who of rock & roll: Motorhead, KISS, Motley Crue, Accept, Girlschool, Heart, Whitesnake, The Scorpions,Megadeath, Mercyful Fate,Quiot Riot,Meatloaf, Ronnie James Dio, and over 100 more! As well, the band has released many videos over the years, mostly while they were either signed to, or licensed to E.M.I./Capitol. The have also had many songs on TV shows and movies.

Today Helix continues to play in excess of fifty shows a year. In 2009 they played Rocklahoma outside of Tulsa, Oklahoma with Great White, Twisted Sister, and many more famous 80’s acts to rave reviews.