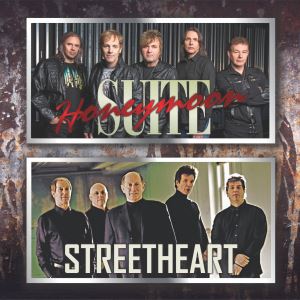 Juno Award-winning Canadian bands Honeymoon Suite and Streetheart will be rocking the stage at the Hard Rock Casino Vancouver on Friday, May 8, 2015.

It was in 1982 when lead singer Johnny Dee, lead guitarist Derry Grehan and drummer Dave Betts founded Honeymoon Suite in their hometown of Niagara Falls. The group’s self-titled debut album was released in 1984 and featured the hit singles, “New Girl Now”, “Burning in Love”, “Stay in the Light” and “Wave Babies”. Two years later, they released their second album, The Big Prize which spawned the hit singles, “Bad Attitude”, “Feel It Again”, “What Does It Take” and “All Along You Knew”. Both albums reached Platinum status in Canada while the singles were certified Gold. Additional hits from later albums included “Love Changes Everything”, “Lookin’ Out for Number One” and “It’s Over Now”.

Formed in Winnipeg by frontman Kenny Shields, keyboardist Daryl Gutheil and bassist Ken “Spider” Sinnaeve in 1977, Streetheart has earned a total of six Gold albums and four Platinum albums. They topped the charts with a non-stop string of hits including “Action”, “Hollywood”, “Under My Thumb”, “Tin Soldier”, “What Kind of Love is This”, “Snow White”, “Look In Your Eyes” and “One More Time”. In 2003, they were inducted into the Western Canadian Music Hall of Fame. Today’s line-up consists of Shields, Gutheil, guitarist Jeff Neill, drummer Tim Sutton and bassist Jake Jacobs.