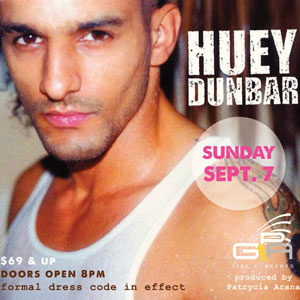 For this spectacular night the Great Performer selected is Huey Dunbar.

Huey Dunbar is the former singer of Dark Latin Groove. His hits with the band included “La quiero a morir”, “Juliana”, “No Morirá”, “Volveré”, “Todo mi corazón”, and a remake of Ricardo Montaner’s original classic “Me va a extrañar”. In 2000, he split up with DLG and since had a solo career which, though commercially successful. For his first solo album he was awarded “Best New Artist” by Billboard magazine, and received a Grammy nomination. The album was certified Gold and Platinum by RIAA.. Sales of “Huey Dunbar IV” have been strong in Latin America. In Billboard’s Tropical Songs chart, the single “Te amaré” had moved from the number 9 song to number 4.[4] “Huey Dunbar IV”, debuted on the Tropical Albums chart at Number 2 on March 20, 2010.

An amazing night ahead of us to enjoy a live dance concert.