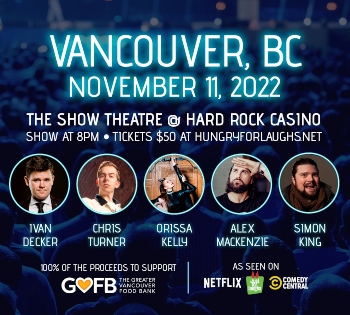 Hundreds of hours go into the production of these events all to create a moment. When you’re in that moment, laughing with hundreds of people from your community you will feel a sense of Love and Belonging. After leaving, although there is nothing that you can hold in your hand, that moment will live on forever as a memory created with people you love

The Goal of Alex Mackenzie’s Hungry for Laughs Comedy Tour is to bring people together and build a sense of community through the power of Laughter, Love and Giving! At at time where the world feels more divided than ever Alex Mackenzie believes that laughter is the solution to re uniting us.

Alex Mackenzie’s Hungry For Laughs Comedy Tour is an annual tour that is a variety act featuring the best performers in the world – it has 3 world class comedians, the best freestyle rapper on the planet and one of the only foot archers in the world!

These acts have been featured on Netflix, Just for Laughs, MTV, HBO, Conan O’Brien, The Late Show with Stephan Colbert, Cirque de Soliel in Las Vegas, NBA Half-time Shows, MLB Stadiums, Britain’s Got Talent, Won Juno awards and even have performed for Her Majesty The Queen of England!

The mission of Alex Mackenzie’s Hungry for Laughs Comedy Tour is to raise $500,000 for Food Banks Across Canada by the year 2024!