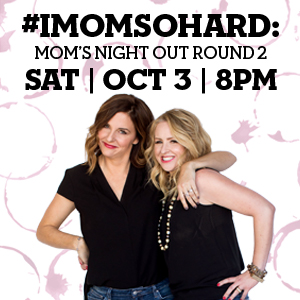 Moms, best friends and funny ladies Kristin Hensley and Jen Smedley are the creators behind the viral web series #IMOMSOHARD, where they discuss the good, the bad and the funny about motherhood – with the help of a bottle of red wine! Now, the online stars are bringing their Mom’s Night Out: Round 2! tour to the Hard Rock Casino Vancouver on Saturday, October 3, for one hilarious show.

No one can make moms feel as uncomfortably normal as Hensley and Smedley. With more than 1.5 million followers on social media and 120 million views of their web series in less than two years, the Nebraska natives blend of honesty and humor resonates with moms and dads alike.

The duo’s #IMOMSOHARD book made The New York Times Best Seller list, and their stand up special is streaming on Amazon Prime. The moms have appeared on a number of national TV shows including The Today Show and The Doctors, and were chosen for People Magazine’s Best of 2017.