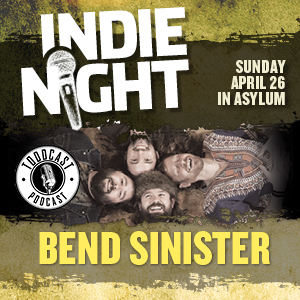 2012/13 was a busy year for Bend Sinister with the band releasing their American debut Small Fame via Nail Distribution. Their North American tour schedule brought them to CMJ, SXSW, Canada Music Week and Breakout West. The band enjoyed opening slots for Awolnation and Valient Thorr in the US and headlining shows throughout Canada from Victoria to Halifax. Small Fame enjoyed runs up the CBC Radio 3 Chart (#8), Canada’s Earshot (#18) and CMJ (#115) and garnered the band nominations for a Sirius XM “Best Emerging Artist” award and a Western Canadian Music Award for “Best Rock Recording”.

Small Fame, received rave reviews from NOW Magazine, CBC, the Georgia Straight and a slew of other online blogs and print media. They have performed at the Dawson City Music Festival, Envol at Macadam in Quebec City, POP Montreal, Sled Island in Calgary, Olio Festival in Vancouver and Live at Squamish. 2014 brought the band to SXSW and invitations to record for Daytrotter.com in San Francisco and JBTV in Chicago. They have toured with and opened up for METRIC, Hot Hot Heat, Dragonette, Born Ruffians, Electric 6, Minus the Bear and We are Scientists.

The band has recently finished recording their follow up with two time Grammy Nominated producer Joe Marlett at Signature Sound in San Diego. Continuing with their penchant for infectious melodies mixed with soaring guitar and crushing B3 organ, the as yet untitled album is slated for release mid February 2014.