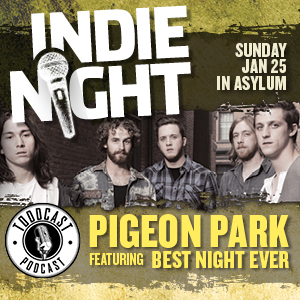 After years of hard work, sacrifice, dedication and battling the usual rigours of writing, recording and touring, Vancouver rockers Pigeon Park are seeing their star on the rise in a big way.

As a respected band on the Vancouver live music scene, known for their ballsy, authentic, high-octane brand of non-formulaic rock, the band earned both popular and critical acclaim following the release of their sophomore EP Black Widow. Critics and fans alike saw the band grow with new songs that were unmistakably theirs; memorable songs that rocked the house.

From the likes of video track “Come Down Slow,” with its driving beat and portrayal of a homeless girl’s life, to the album’s title track with its unforgettable melody and “Feel The Rain,” an exploration of the darkness and negative emotions that overtake us at the demise of an intense relationship, Black Widow certainly does slice. Yet thanks to its compelling and insightful essence coupled with driving, pointed and raw musicianship, it’s a delightful incision.

“We were all friends jamming since childhood,” reflects Weber. “We all went to school together, discovered bands together and jammed together. Eventually, we just bridged that gap.”
The formation of Pigeon Park was more than merely spanning a divide, however. The release of their debut album The Sun and two cross-Canada tours served to amplify creativity and burgeoning support for the band. Still, Pigeon Park outshine their previous effort with the consolidated attack and no-frills direction of Black Widow.

Not long after the release of the EP, Pigeon Park won the highly competitive 99.3 CFOX “Seeds” competition. Previous winners of the acclaimed radio station contest have included Nickelback, Matthew Good, Bif Naked, Default and Theory of a Deadman. As the Platinum Award winners, the band will be touring with Sam Roberts in 2014 and have received $10,000 in tour support and $10,000 in gear.

But the cherry on top of their rock and roll sundae, was earning the opportunity to record their next album with legendary producer/engineer Garth Richardson (Rage Against The Machine, Red Hot Chili Peppers).

“His name is pretty intimidating,” says Nick Weber, the band’s vocalist and co-founder. “We are walking into that studio more prepared than we have ever been. We aren’t about to waste his time or ours. Under his guidance we know we will be creating the best product we can”.

Still in their early 20s, Pigeon Park have been very lucky in the rock ‘n roll game so far. They have won one of the most prestigious radio contests in the country, toured a across the country in support of their two EP’s, have released an official single to commercial rock radio, performed on numerous TV shows across three provinces, and have built and maintained a steadily growing fan base.

“This is what we’ve been working for since the beginning of Pigeon Park,” says Okabe. “We’re more focused and hungry than ever before.”