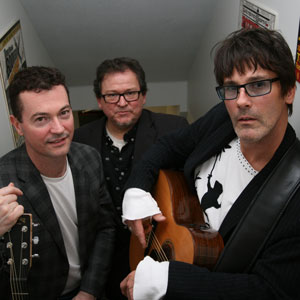 All The Kings Men

An exciting new local group called “All the King’s Men” has quickly built a strong following. Musically speaking, theyʼre an impressive group with an interesting history:

– Brian King (lead singer and guitarist) is a renowned singer from Winnipeg who has performed with Billboard Heroes, The Freeze as well as C.A.R.A.S ® award winning band Fabulon. He has opened for INXS, Steppenwolf, Trooper, Chilliwack, Sarah McLachlan.

– Chris Pettypiece (guitar and vocals) is an enthralling guitarist and strong vocalist. He is currently a senior executive at Telus, and is an incredible craftsman who makes beautiful guitars as well as he plays them.

Together, the three musicians have created a tremendous new local group with excellent musicianship, great vocals and a strong on-stage charisma, which immediately wins over the audience.

Performing a wide range of songs both old and new, the set list includes The Beatles, John Mayer, Jason Mraz, Bruce Springsteen, David Bowie, The Who, U2, Proclaimers, Peter Gabriel and many more… Literally every song flows into the next and the sets are very well received.

The three group members are all established businessmen, performing only because they love to play… Numerous recent shows have been rewarded with standing ovations and encores from a packed house.

Donʼt miss your chance to enjoy All the Kingʼs Men!