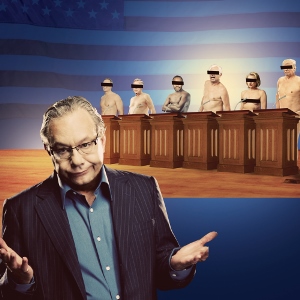 Known as the “King of the Rant”, Black uses his trademark style of comedic yelling and animated finger-pointing to skewer anything and anyone that gets under his skin. His comedic brilliance lies in his ability to make people laugh at the absurdities of life with topics that include current events, social media, politics and anything else that exposes the hypocrisy and madness he sees in the world.

It was in 1996 when Black came into national prominence with his appearances on Comedy Central’s The Daily Show which led to his own specials on Comedy Central, HBO and Showtime. In 2001, he received an American Comedy Award for “Funniest Male Stand-Up” and three years later, he was recognized with a Pollstar Award for his blockbuster comedy tours, Rules of Enragement and Red, White & Screwed.

He went on to earn a Grammy Award for “Best Comedy Album” for his 2006 album, The Carnegie Hall Performance and was awarded a second Grammy for his 2011 album, Stark Raving Black.

In 2006, he had a breakout year as an actor landing roles in Barry Levinson’s Man of the Year, Steve Pink’s Accepted and Paul Feig’s Unaccompanied Minors while lending his voice to the role of “Jimmy” in Bob Saget’s parody, Farce of the Penguins. As an author, he has written three best-selling books … Nothing’s Sacred (2005), Me of Little Faith (2008) and I’m Dreaming of a Black Christmas (2010) … all of which garnered critical praise and spent several weeks on The New York Times Best Sellers list.