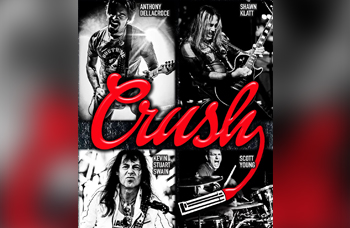 Crush is an ‘all killer, no filler’ classic rock band!

It was formed after bassist Kevin Stuart Swain (Jon Mikl Thor, Al Harlow ) read an open letter from a Florida club owner venting his frustration with cover bands. It said, “The success of a bar band is measured in ounces. You are there to put money in the till. Play the songs people want to hear, look good doing it, play them as good as the people that recorded them and pack the dance floor”.

Kevin first enlisted drummer Scott Young. Scott toured with Al Harlow of Prism and has thousands of hours of live and studio experience. Next, he added Headpins guitarist Anthony Dellacroce who is a a veteran rocker having worked with Doucette and Honeymoon Suite. Last but not least was front man lead vocalist, Shawn Klatt of the AC/DC tribute Thunderstruck, rounding out the line-up with tremendous range and rock star personas.

Kevin consulted the top 200 DJ requests’ lists and other sources to get a pulse on what people want to hear and came up with a potential song list. As the band had three successful producers, the next task came easy.  the band’s strengths and the fact that the band is built around a guitar rock god, they presented their song-list that delivered the goods.

So far, Crush has had tremendous response with capacity crowds and their core fanbase follows them everywhere. When you combine the industry veterans who have performed alongside some of the biggest Canadian recording acts with the perfect mix of songs and dialed into what the audience desires for, it is pure magic!

So get off that couch and come rock out with CRUSH, the best band to hit the scene in a long time!