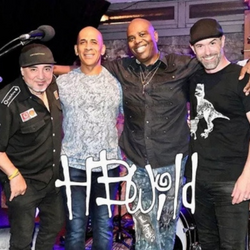 Henri Brown is a Musician, Singer, Songwriter, Music Producer, Sound Engineer, Film Writer, Film Producer, Actor and so much more. He is a dedicated, devoted, passionate, creative  and talented man who puts his whole heart into anything he is involved in.

Henri’s life has always been about Music and Creativity. He was exposed to music at a young age, being the first cousin of Jimi Hendrix, the nephew of Eleanor Collins and the son of Black Cultured Pearl.

Music called and Henri came running. He learned to play Bass at a young age and has since mastered that craft, along with many others.

Henri has been blessed with working with many other talented artists in his studio such as Buddy Miles, Narada Michael Walden, Wayne Otis, Gordon Durity, Chris Sigerson, Tod Woodward, Jayson Dean, Sheldon Reynolds (of Earth, Wind and Fire), Blind God, Stan Ganapolsky, Wynton Marsalis, Denny Clark, Corey Phillips, Vince Mai, Brett McCrady and Henri’s beautiful Mom, Black Cultured Pearl. He has recorded some amazing music, some of which has been heard by others and some which has yet to be released and shared with the rest of the world.

Henri has also been blessed to be in the presence of some other amazing talents such as; James Brown, Diana Ross, Bryan Adams, Montell Jordan, Morgan Freeman, Ricky Martin, Will Smith, John Travolta and many more, it would be impossible to name them all.

Henri’s love for Music has given him the chance to travel the world and meet some amazing people along the way. He has made connections wherever he has been and had the opportunity to bless people with his smile, his heart, and his soul.