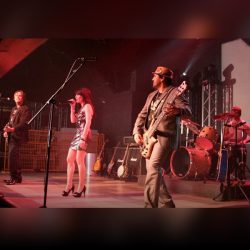 Formed In 2006, Whiskey Jane quickly rose to the top of the local country scene establishing themselves as a sonic and visual force that must be seen and heard. The band has gathered multiple BCCMA, WCMA nominations over the years, CCMA showcases, toured all over Canada, Played for Olympic events in 2010, Released two albums and nine singles to radio and a two-week tour in China. Whiskey Jane has shared the stage with such greats as Terri Clark, Bill Henderson, Patricia Conroy, Trooper, Dan Hill, Our Lady Peace, The Arkells and many more

Now, in 2022, the original line up of Natalye Vivian, Amber Locker, Kirby Kaye, Donny Ducharme and Larry Church have reconvened to perform and produce new music with their outstanding harmonies and fantastic live show.