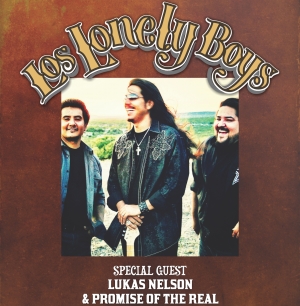 Tex-Mex sibling trio Los Lonely Boys will be bringing their unique mix of blues-rock and brown-eyed soul to the Hard Rock Casino Vancouver on Saturday, May 9, 2015 where they will be joined by special guest Lukas Nelson & Promise of the Real.

Hailing from San Angelo, Texas, the Garza brothers – guitarist Henry Garza, bassist Jojo Garza and drummer Ringo Garza, Jr. – formed Los Lonely Boys in the early 90’s. They recorded their 1993 self-titled debut album in Austin at Willie Nelson’s Pedernales studio with Willie sitting in. The album’s lead single, “Heaven” was a huge hit on the charts and garnered the band a Grammy Award for “Best Pop Performance” while their second single, “More Than Love” earned them a Grammy nomination. They later released the 2006 album, Sacred which spawned the singles, “Diamonds” and “My Way” followed by their 2008 album, Forgiven which produced the single, “Staying With Me”. The group’s most recent album, Revelation was released earlier this year and includes the cojunto touches of “Blame It on Love” and the reggae groove of “Give a Little More”.

Guitarist, singer & songwriter Lukas Nelson was raised on his father, Willie Nelson’s famed Honeysuckle Rose bus. Today, the 25-year-old Lukas is still on the road but with his own band, Promise of the Real. After having played their first shows in 2008, he and the band went on a nine-show tour with Willie the next year while releasing the well-received EP, Brando’s Paradise Sessions. They then released their 2010 self-titled debut album which featured the group’s first single, “Four Letter Word” and the surf-rock jam, “Start To Go”. In 2012, they released the album, Wasted and opened for John Fogerty on his coast-to-coast tour across Canada.