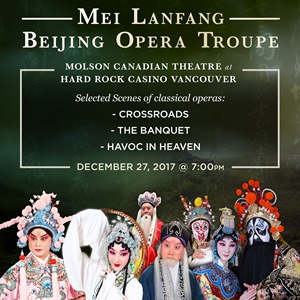 There are three genres of ancient theatrical culture: ancient Greek, Indian Sanskrit and Chinese Opera. The most important traditional style within Chinese Opera is Beijing Opera, which captures the cultural essence of China. Beijing (or Peking) Opera contains multifaced theatrical elements that go beyond music and singing in order to combine the treasures of the oriental arts: drama, dancing, martial arts and acrobatics. In 2010, Beijing Opera was declared an “Intangible Cultural Heritage of Humanity” by UNESCO. Now that you know our name, we invite you to come out and see an authentic performance!

Beijing Opera’s main expressive elements include hand gestures (more than 50 kinds of hand gestures), expressions in eyes, foot steps, singing, appearance, and the movements of long traditional dress sleeves. The identity of each character can be distinguished through facial makeup and costumes. By seamlessly integrating all of these elements, this traditional opera is highly visual and ornamental.

As the most renowned Beijing Opera troupe in the world, the Mei Lanfang Beijing Opera Troupe bears the name of the greatest opera star in modern Chinese history. Founded in the 1920s, this troupe’s distinctive interpretation and style was created by Mr. Mei Lanfang.

The current production’s ensemble cast includes 70 well-known, world-class male and female actors. With renowned Mr. Li Hongtong as the lead, the performances are directed by the celebrated maestro Mr. Ye Shaolan. This event gives audiences a rare opportunity to see a highly distinctive and distinguished show.

An age-old truth: Art ultimately have no boundaries and can be shared by everyone!