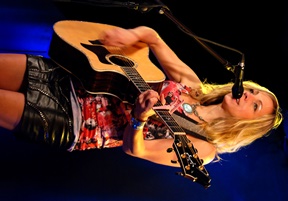 Canadian born Dekker’s got a ‘voice like chocolate’, and that could indeed be from the concerts she’s been singing since she was a teenager. She grew up in the artsy and musical community of Deep Cove, BC and she was especially drawn to live performers. Musically her favourites then were The Police and Joni Mitchell. She was influenced by her parents music as well, which is likely what gives her that hint of a country sound; they would blast Leon Redbone, Emmylou Harris, & Willy Nelson on route to ski trips & road trips. Now she pens her own hits, accompanied by her world-class strumming style, and she hits the road often.