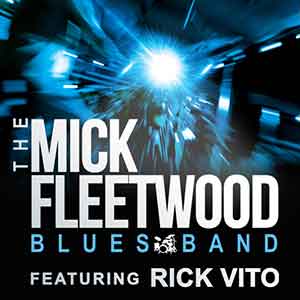 Acclaimed drummer and co-founder of Fleetwood Mac, Mick Fleetwood and his band will be hitting the road with their just announced Fall Tour which will include a date at the Molson Canadian Theatre at Hard Rock Casino Vancouver on Friday, September 30, 2016.

Aside from originals, The Mick Fleetwood Blues Band’s repertoire concentrates on material drawn from the formative years of Fleetwood Mac including such Peter Green-era songs as “Oh Well”, “Rattlesnake Shake” , “Love That Burns” and “Black Magic Woman” – later made famous by Santana – and a string of blues classics including “Shake Your Money Maker” and “When the Levee Breaks”.

In addition to its namesake, The Mick Fleetwood Blues Band features singer/guitarist Rick Vito who was a member of Fleetwood Mac from 1987 to 1991 along with bassist Lenny Castellanos and keyboardist Mark Johnstone who also provides background vocals. It was in 2008 when this same line-up recorded Blue Again!, a live album that exemplified the quartet’s power as a performing act and underscored their adherence to the living, breathing genre that is the blues.

Soon after its release, the album made it into the Top 5 on Billboard’s “Top Blues Albums” chart. It later went on to be nominated for a Grammy Award in the “Best Traditional Blues Album” category.