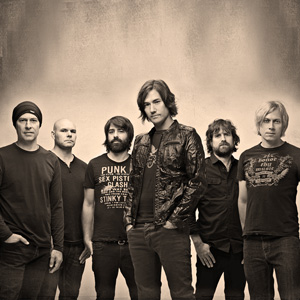 The Juno Award-winning band, Moist will be hitting the road with their just announced Canadian tour which wraps up at the Hard Rock Casino Vancouver on Thursday, December 4, 2014.

It was in 1994 when the Vancouver-based rockers released their debut Multi-Platinum album, Silver which spawned their first hit single, “Push”. They followed up two years later with their second Multi-Platinum album, Creature which featured such chart-toppers as “Leave It Alone”, “Resurrection”, “Tangerine” and “Gasoline”. The band’s third album, Mercedes Five And Dime was released in 1999 and achieved Double Platinum status.

After taking an extended hiatus in 2001, Moist reunited last year for a series of exclusive sold-out shows before heading back into the studio to record their first album in fifteen years. Universal Music Canada has since announced the signing of the band and has confirmed the release of their new album, Glory Under Dangerous Skies on October 7. The album was recorded in Toronto and will include the Top 5 rock radio hit, “Mechanical” as its first single.