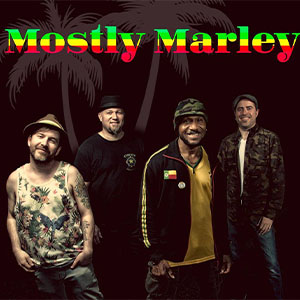 Mostly Marley started as a house gig, with the idea of bringing Classic Reggae to an otherwise starving audience. The name stems from having been asked; “What kind of music do you play?” The answer would always be; “Classic Reggae by various artists, but mostly Marley.”

As a core band of four, a basic rhythm section consisting of Billy Mendoza on bass, hailing from Oahu Hawaii, is a much traveled and experienced musician whose consistent and tasteful playing contains the glue that holds it all together. Russ Klyne on guitar, also known for his work with his own band Salvador Dream, Namedropper, and also as K-OS musical director never ceases to amaze with new, fresh and innovative ideas. Tim Proznick on drums who is one of Vancouver’s most sought after musicians. Credits include Daniel Wesley, Hey Ocean, Kyprios & Sweatshop Union. Tilden Webb, has been known to grace us with amazing keyboards who is easily one of the best players in the country. And last but not least, Mike Henry on vocals, having been raised in Southern USA, is well rooted in Old School Funk and Soul, Gospel and Blues.

As a band, Mostly Marley performs with passion and they try to maintain credibility while also remaining true to the spirit
of Reggae. Mostly Marley is a band that will take you on a musical odyssey with good times to be had by all.