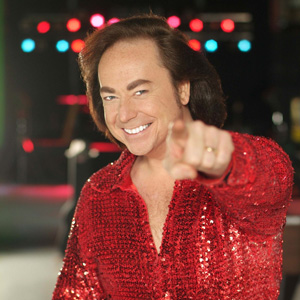 Bobby Bruce grew up on stage; appearing in film and television as a child, then musical theatre and rock revues in his youth; investing more than a quarter of a century honing his triple-threat set of entertainment skills.  In 1994, a “legend” was born in Toronto when Bobby Bruce’s incomparable talent for impersonating Neil Diamond came to life on stage.

Bobby began his tribute career with some of the biggest names in the business including Legends of Rock and Legends in Concert; and he has never looked back! Following a royal performance for the King and Queen of Malaysia, and hot on the heels of his first tour of Australia; in 1998, Bobby changed the nature of his show from impersonation to tribute and created Nearly Neil and the Solitary Band now a regular fixture at elite casinos and theatres across North America, Australia and Europe.

In 2000, Bobby launched another project – starring in the outrageous “Shagadelic Swingers” a musical spectacular celebrating the Austin Powers movies. They performed for New Line Cinema official movie events, the “Yeah Baby Awards” at the Toronto Sky Dome – as the half time entertainment during a Toronto Argos game and a military tour of NATO, Canadian and International bases in Bosnia.

Featured in MOCKSTARS, a million dollar feature length documentary about Canadian tribute artists in 2002, Bobby’s star continued to climb. The following year saw his first national tour of New Zealand with Nearly Neil and the Solitary Band. Forming Canadian-A, Bobby’s all-Canadian content show, kept him busy in 2004. Bobby made a triumphant return to musical theatre in 2005 as the Emcee in “Cabaret” to considerable critical acclaim and an Ovation nomination for Best Performance (Male). In 2006, Bobby was very pleased to receive the “Entertainer of the Year Award” from the Pacific National Exhibition.

Returning “Down Under” in 2008, Bobby’s Nearly Neil crusade in Australia still continues today. He’ll return to tour Tasmania and NSW in June/July 2012; his sixth national tour in 4 years. Bobby and the Solitary Band were busy in 2009/2010 travelling 48,000 kms throughout 22 states in America to perform 50 shows for Live on Stage. Their first tour of Holland was a resounding success in 2011. Nearly Neil and the Solitary Band will return this fall for more than 20 shows in the Netherlands and Belgium.

Bobby’s latest project sees him delving into original music. Bobby has enjoyed collaborating with the band on a concept album titled “New World” that is currently in production.