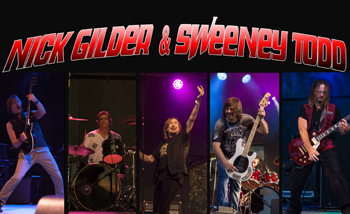 Hard Rock Casino Vancouver will be celebrating its first anniversary on Saturday, December 20, 2014 with Nick Gilder & Sweeney Todd performing in an intimate concert event with special guests Best Night Ever.

It was in 1975 when Canadian singer-songwriter Nick Gilder and guitarist Jim McCulloch founded the Vancouver-based glam rock band Sweeney Todd where they quickly earned their rock wings playing in every conceivable venue. The following year, they released their self-titled debut album which featured the Juno Award-winning hit single, “Roxy Roller”. The single went on to become a #1 hit in Canada holding the top position on the RPM National Singles chart for three weeks.

Nick and Jim left the band in 1977 and moved to LA to begin work on Nick’s solo album after being signed by Chrysalis Records. His first album, You Know Who You Are was released that same year. His second album, City Nights spawned the hit singles, “Hot Child in the City”– which reached #1 in both Canada and the US – and “Here Comes The Night”. Nick went on win two Juno Awards as well as a People’s Choice Award in the US. His next album, Frequency was released in 1979 and produced the hit single, “(You Really) Rock Me”.

During the span of Nick’s illustrious career, he has also written for such artists as Bette Midler, Pat Benatar, Blondie, Patty Smythe & Scandal and Joe Cocker. Since 2000, he has been back performing with Sweeney Todd to packed houses. Today Sweeney Todd’s line-up consists of Joey Wowk on lead guitar, Mark Kenny on bass, Frank Baker on drums and Mike Russell on keyboards.