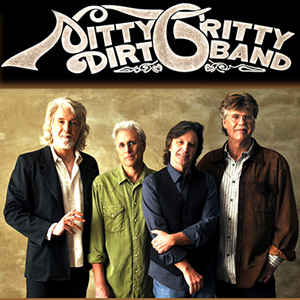 The legendary NITTY GRITTY DIRT BAND remains an iconic and profoundly influential force in Country Rock and American Roots Music. With multi-platinum and gold records, strings of top ten hits such as “Fishin’ In The Dark”, “An American Dream”, “Make A Little Magic”, “Fire In The Sky”, “Dance Little Jean”, “Long Hard Road (The Sharecropper’s Dream”, “High Horse”, “Modern Day Romance”, “Partners, Brothers And Friends”, “Stand A Little Rain” and Grammy Hall of Fame inductee “Mr. Bojangles” (2010) the band’s accolades continue to accumulate. Their groundbreaking “Will The Circle Be Unbroken” album has been inducted into the U.S. Library of Congress as well as the Grammy Hall of Fame. Their latest release, “Speed of Life” (2009, SugarHill Records), opened to critical acclaim; proof that this crew hasn’t lost a lick.

Fans old and new will not want to miss this stop on the Canadian Tour of the immortal NITTY GRITTY DIRT BAND!